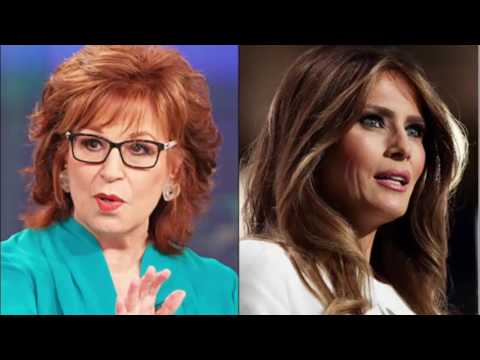 It seems Joy Behar, 74-year-old cohost of ABC’s ‘The View’ was on ‘Late Night With Seth Meyers’ earlier last week and had to bash the Trump family again. Behar just doesn’t know when to quit, like most other liberal comedians.

Liberal comedians like Behar and Griffin seem to have forgotten what real comedy is all about. They only know how to use the First Lady and President Trump as open targets when it comes to their pathetic jokes.
Hey Joy! Maybe you forgot what happened to Griffin’s tour after her stupid antic!

“How do you frame Melania?” Meyers asked The View co-host. “Are you one of these people that has sympathy for Melania or do you think that we should judge her exactly like anybody with free will?”

Behar, responded that “I feel sorry for her.”

“She had to sleep with him once. At least once she did right? And then when she was in New York and we had to pay a million dollars a day to keep her here just because she doesn’t want to sleep with him, we have to pay for that. I didn’t like that,” Behar said.

Meyer agreed, saying, “I don’t want to sleep with him, but nobody gives me any extra money…. They don’t pay my rent.”
It seems, Behar was referring to the fact that Melania moved into the White House with 11-year-old son Barron just earlier this month. Of course, prior to that, Melania and Barron were living at Trump Tower in New York so that Barron could finish the school year uninterrupted.

Most mothers would think that that gesture was a good thing….Melania wanting to keep school consistent for Barron, …but NOT Joy Behar…NOPE!

Tuesday’s interview was not the first time Behar has attacked the Trump family.

In May, Sen. Al Franken, D-Minn., was a guest on The View panel, where he discussed President Trump’s decision to remove the United States from the Paris Climate Agreement.

Franken said that he did not want to explain to his children why he didn’t do more to deal with climate change.

“It amazes me that he is not concerned about his grandchildren. What does that say about him? But we have to go,” she added.

Joy Behar is a comedian, but just like Kathy Griffin who took it over the top with her bloodied replica of Trump’s head…there are certain things that are just NOT funny.

When you poke fun of the First Lady, President Trump and their personal life the way Behar did, it’s just pure tasteless.

It seems the liberal leftists and comedians like Behar and Griffin can throw all kinds of jokes around about the Trumps, but if things were reversed and we were saying that about Obama….they’d be the FIRST to call us out as racists.

I guess when it comes to the First Lady and President Trump, Behar and other liberal leftists, like Kathy Griffin, seem to think it’s open target season and anything goes. Enough already! It’s pathetic!

Americans cancelled their tickets for Kathy Griffin’s tour after her antic, maybe it’s time for Americans to send ABC and Joy Behar a similar notice. Stop watching shows on ABC and get them to cancel ‘The View’. When Americans hit their pocketbooks, those actions will suddenly get noticed. Actions always tend to speak louder than words. It’s time to boycott ABC.