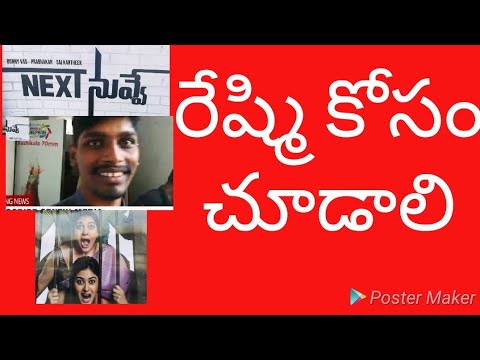 Aadhi Sai Kumar’s latest flick, Next Nuvve has raised expectations among the audience with its trailer and first look posters. TV actor Prabhakar has turned director with this film which has hit the screens today. Let’s see how it is.

Karthi(Aadhi Sai Kumar), who is deeply struck by financial issues gets to know that his father(Posani) has left a resort for him. In order to make things meet, Karthi goes to his village and reopens the resort. From day one, Karthi notices drastic changes in the resort as weird things start creeping up most of the time. What kind of changes did he notice? and What is the main reason behind these changes? To know this, you have to watch the film in theaters.

Hero Aadhi Saikumar’s performance is decent in parts. Heroine Vaibhavi did an okay job as hero’s girlfriend and her performance in horror scenes is pretty decent.

Noted actor Brahmaji is undoubtedly a major plus for the film. His comedy timing and typical one-liners evoke a few laughs here and there. Anchor Rashmi Gautam performed decently in her limited screen presence.

Noted actor, Raghu Babu’s comedy in the pre-climax sequence is good and his getup and hairstyle were designed well. Comedians Prudhvi and Thagubothu Ramesh entertain in parts with their comedy.

One of the major minus points of the film is it’s weak and abrupt storyline. Prabhakar, who debuted as a director with this film has failed in narrating the film quite engagingly. Though Aadhi gave a decent performance, his character was not elevated properly which may not appeal to a larger section of the audience.

There are many silly and illogic scenes which will surely test the patience of the audience to no extent. Yet another drawback is that the director failed to give a clarity on major topics like why the ghost stays in the resort over the years and what is the hidden story behind it.

Director Prabhakar, who has chosen a horror comedy genre as his debut film has done a below average job with his execution. He should have taken time and sit on the script for even better results. Editing is not up to the mark as many scenes in the film end up abruptly without any proper conclusion.

The cinematography is okay as most of the film runs in a single resort. Music by Sai Karthik is good as he has given some impressive background score which is most important for these kinds of films. Production values are good for this limited budget film.

On the whole, Next Nuvve is yet another routine horror comedy which falls short of expectations. Though Brahmaji and Raghu Babu’s comedy entertain in parts, the flat and abrupt proceedings may not appeal to a larger session of the audience. Those who like horror comedies and desperately want to watch a film this weekend, you can try this film out but go in with no expectations at all.