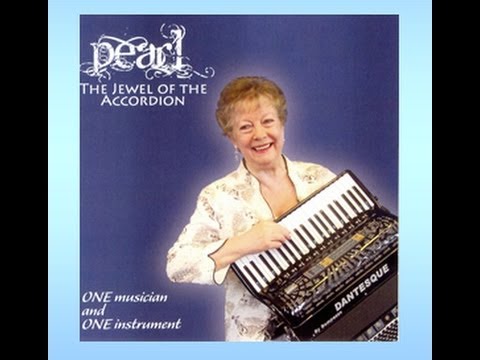 PEARL FAWCETT-ADRIANO (International Virtuoso Accordionist)
Without doubt, PEARL-FAWCETT-ADRIANO has achieved international recognition as an outstanding accordion virtuoso
and has done much to raise the standing of the accordion as a ‘musical’ instrument, both in Britain and abroad.

Her name as a child was Pearl Fawcett and she was born in Barnsley, South Yorkshire, England. Beginning accordion lessons at the age of 8, she had many successes in her early life, winning every major national competition organised by the British Association of Accordionists (B.A.A), including British Open Section and British Commonwealth Challenge Cup (four successive times) and gaining the B.A.A Diploma (with Distinction) at the age of 15.
Her first broadcast on BBC radio, and also television, was at the age of 13, after which she appeared many times.
She became Junior World Champion (C.M.A. Trophée Mondiale) in Ancona, Italy and the following year she became the Senior World Champion, in Hamburg, Germany.
She studied piano, ‘cello, singing and all branches of music at the Royal Manchester College of Music, and after gaining Graduate, Performance and Teaching Diplomas (all with Honours), she became a Professor at the same college for a time. She then decided to concentrate on performing and turned fully professional.
Pearl was a ‘first’ in a number of situations; she was the first to teach accordion at a Conservatoire of Music in Great Britain, and she was the first to give accordion recitals of classical music at a British Conservatoire of Music, and also on TV. She was the very first Western accordionist to do a solo classical concert tour of the former USSR and she made a tremendous impact on the Russian audiences, opening up a different world of music and sounds (on acoustic/electronic accordion) and creating great interest in the piano-accordion (as opposed to the button accordion), after which it became more popular.
Known previously as PEARL FAWCETT, she has had great success in her professional career. On the classical side, she has performed concerts and recitals on radio, and in such prestigious concert halls as London’s Royal Albert Hall, Wigmore Hall and Purcell Room (Royal Festival Hall); Moscow’s Tchaikovsky Hall and Leningrad’s Philharmonic Hall; with concert tours in the former USSR and Europe, and appearances with such orchestras as the Royal Philharmonic and the BBC Northern Symphony. On the lighter side, there have been many appearances on BBC Radio (including “All Kinds of Music” and “Melodies for You”) and Television (including “Stars on Sunday and “The Good Old Days”). She was a very popular artiste on Radio 2’s “Charlie Chester Show” and appeared on it regularly for 10 years. Some famous artists she has appeared in concert with include Semprini, Max Jaffa, Roy Castle and
David Jacobs. Pearl has made a number of outstanding recordings, and is also an excellent pianist, teacher, composer and arranger.

Highly esteemed internationally, Pearl has appeared and performed duets with accordion virtuosos such as Gervasio Marcosignori, Yuri Kazakov and Peppino Principe. She has also been highly honoured by having a wax imprint of the right hand displayed in a unique accordion museum in Recoaro Terme in Northern Italy. This is the only one of its kind in the world and celebrates famous and notable accordionists who have influenced and contributed to the world of the accordion. Having had to take a break from performing for several years because of family reasons, she has now returned to playing, and for professional purposes, she uses the name PEARL FAWCETT-ADRIANO.

Pearl Fawcett-Adriano’s vast repertoire ranges from the classics to light music, French Musette and continental, and no matter what kind of music she plays, her marvellous technique and control of the instrument ensures that the music is interpreted to the full. Specialising on the acoustic/electronic accordion, she brings a completely new dimension to the instrument, and she has such a command of the instrument that she utilises it to the full orchestral and musical extent. Her subtle use of the expression pedal, split second changes of registers and perfect control of the bellows produce a musical tapestry of multi coloured sounds and effects which have greatly impressed many people around the world.